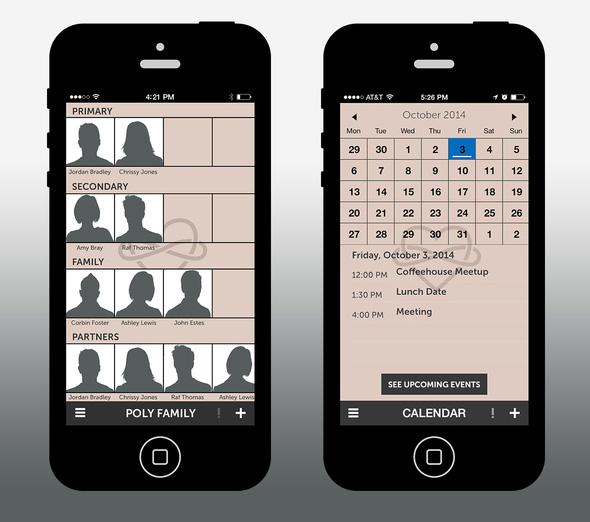 That’s why the new phone app The Poly Life has two benefits: it helps poly folks stay organized, and its existence fights misconceptions against the poly community.

The Poly Life is the brainchild of an anonymous polyamorous quad, brought to life by app developer Christine Tseng. They all came together after the family had been in contact with Natalia Garcia, the producer of Showtime’s Polyamory: Married and Dating. The family had to reschedule their Skype session with Garcia more than once, prompting them to joke that they needed an app to keep them in line. Garcia name-dropped Tseng, and things took off from there.

Tseng had previously only created games, so she was thrilled by the idea of stepping out of her comfort zone to develop an app for the poly community. She also knew there was no competition, since The Poly Life was not a dating app or a hook-up app (really, it’s a productivity app). Tseng and the family spent a year working on the app before releasing it.

Some features of the app tackle logistics: a shared calendar, a chat function, a map, a to do list. Others help define parameters in the relationships, such as rules, boundaries, and statuses — allowing for updates and changes over time. All of these features are private except for the “Poly Fun” section, which allows users to publicly share events with the broader poly community.

A member of the family behind the app explained a fun use for the “Agreements” section of the app:

I drive my wife crazy with my laundry. I’m a bit messy and tend to throw my dirty clothes on the floor. So she sent me an agreement, “If all of your clothes make it into the hamper this week, we’ll do a group date night of your choice.” I had to press the agree or disagree button and, of course, I agreed! That agreement stayed in my phone as a reminder and for the most part, all of my dirty clothes made it into the hamper. Although we use the agreements mostly for relationship and sexual boundaries, we want to remind everyone to think outside of the box. This app has been a really fun way to make the mundane interesting and to have fun with each other.

Progress toward mainstream acceptance of polyamory is slow, but apps like The Poly Life, along with classes, articles, interviews, and stories all contribute toward a better, more nuanced understanding of what being polyamorous means.

Sometimes, it just means delegating someone to pick up milk on their way home.