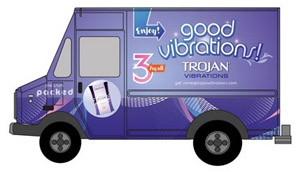 Here in Portland, we’re no strangers to food trucks (have you experienced the glory that is Potato Champion?!), but this is something new: a truck that promotes vibrators.

Although this was a short-lived event based on blatant product promotion, it brings up a pivotal question: what if a sex-toy-peddling truck popped up on the streets of Portland? Would you buy a toy from it? Which food cart pod would it most thrive in? And would the world explode with awesomeness if this truck were set up next to the place selling fried pies?