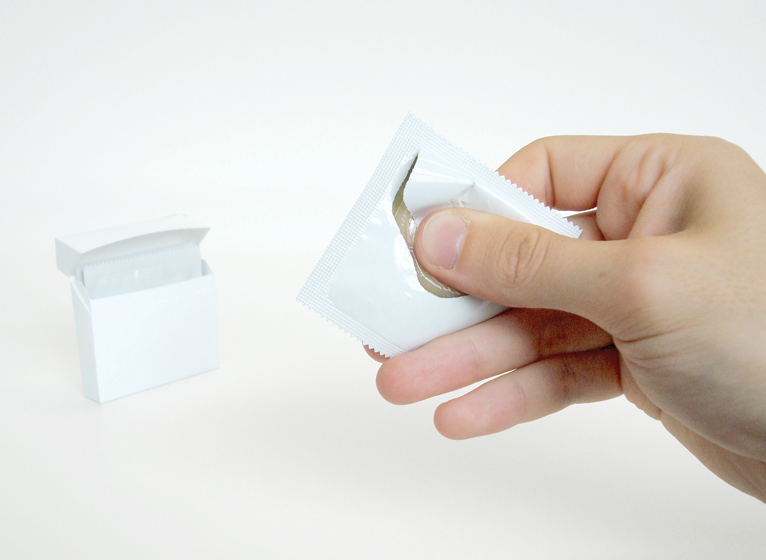 It’s so simple, so ingenious, it’s surprising nobody has thought of it before: a condom that can be safely and easily opened with one hand. Designer Benjamin Pawle came up with the idea as part of his two-part “Preserving Human Dignity” project, which seeks to empower those with hemiplegia — a disorder that causes paralysis on one side of the body — in performing common tasks at different stages of life.

Transformation Game, the first part of Pawle’s project, is a fun and interactive set of wool squares that can be buttoned together to complete a unique outfit. It is meant to teach children with hemiplegia how to work with buttons. The second part of the project addresses sexual maturity, presenting a solution to the difficulty of opening a condom with one hand.

The outer wrapper of the One-Handed Condom is made of foil, with a perforated seam and small ridge along the front. The wrapper is lined on the inside with a thin plastic membrane which protects the condom from damage. Opening the condom is about as easy as snapping your fingers — and just as quick. After watching this, I guarantee you will wish you had a One-Handed Condom to impress your next sexual partner with:

Pawle reports that those testing his condom found it not just easy to open, but enjoyable. And that was his aim:

The wrapper has been designed to exploit the moment of opening, trying to make it as smooth in real life as the rose tinted vision in your head. The design of the new wrapper focuses on the gesture of opening and how this can add charm to the action . . . something that is positive and captivating in a way; a mood enhancing tool and next generation contraceptive experience.

Of course, a condom wrapper like this could be beneficial to tons and tons of people, not just those with hemiplegia. Let’s hope Pawle can take this design even further, because if it ever made it to full production, it could positively impact many lives.

The One-Handed Condom is currently on display with the rest of the Preserving Human Dignity project at the Victoria & Albert Museum as part of the London Design Festival.