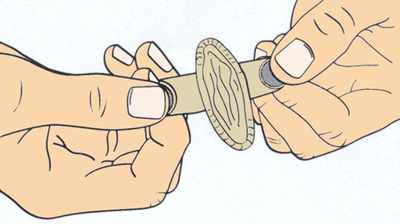 The future of condoms is looking bright. Back in March, the Bill & Melinda Gates Foundation dangled a $1 million carrot in front of anyone who could invent a condom that “significantly preserves or enhances pleasure.” Now, after over 800 entries were submitted, the Foundation has chosen 11 to receive grants — and unveiled their prototypes.

Many of the condoms are crafted of new materials, such as thermoplastic elastomer (durable and stretchy polymers that don’t tear or deform as easily as latex), graphene (a carbon material currently used in cell phone screens that is one atom thick and virtually indestructible), polyethylene (a material that “wraps and clings rather than squeezes,” making it less restrictive), and even collagen fibrils from cow tendons (which feels like skin and enhances heat transfer).

Other innovators aim to make application more intuitive, as in the case of a condom with pull tabs, and the “Rapidom,” which is applied in a single motion, without the user ever touching the condom itself.

One of the inventors to be awarded a grant is a chemistry research professor and scientist at the University of Oregon. In his grant application, Richard Chartoff explained how he will use polymers to construct polyurethane condoms that are not just stronger and thinner than current condoms, but also one-size-fits-all — body heat will cause the molecules in the condom to contract, conforming it to the wearer. Additionally, Chartoff’s condoms will be embedded with nanoparticles that contain STI-fighting drugs.

The Bill & Melinda Gates Foundation has dispersed $1 million among the 11 grant recipients, with the promise of an additional $1 million more for those who show the most promise after further development. Inventors now have 18 months to show that their condoms are safe, effective, and can be easily manufactured. Then they can apply for a second grant to scale up production and launch clinical trials.