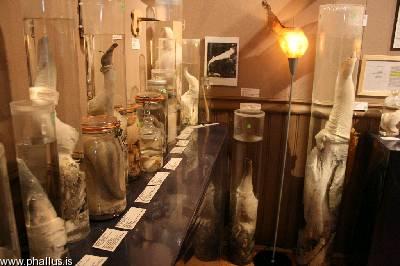 Need a reason to go to Iceland? Behold: the Phallological Museum, a place where you can witness a staggering 276 penis and testicle specimens preserved in jars of formaldehyde, dried and mounted on the walls, or made into lampshades.

The museum boasts a wide array of phalluses from bears, whales, seals, walruses, and other mammals. Situated in a small fishing town, the museum draws thousands of visitors each summer and is considered integral to the region’s tourist industry.

The latest exciting news from the Phallological Museum is that they have finally acquired a human specimen from a 95-year-old man named Pall Arason. Arason was described as a “funny guy” who “liked to be in the limelight.” Naturally, the museum’s owner (who has been interested in “phallology” ever since, as a kid, he was given a whip made from a bull’s penis in order to herd cattle) is thrilled. “I have just been waiting for this guy for 15 years,” he said.

Outside of the museum is a large tree trunk carved into the shape of an erect penis. If that’s not the perfect photo opportunity, I don’t know what is.