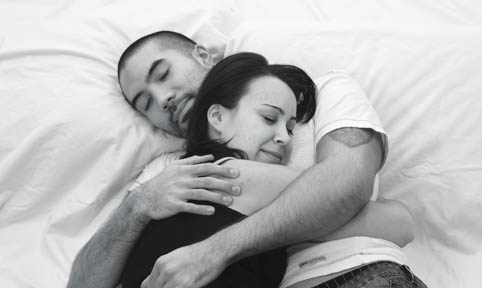 But if that seems fishy, it is: that figure would amount to less than 1 minute of cuddling per customer, with the cuddler working non-stop, 24 hours a day.

The truth is that owner Samantha Hess got 10,000 email inquiries in the first week of opening her shop, Cuddle Up To Me, on E. Burnside in November last year.

But none of this was a surprise to Hess. She knew the demand was there — she’s been cuddling professionally since 2013. She had just exited a 13-year relationship and was inspired by the free hugs offered by folks at Saturday Market. For a while, she traveled to clients’ homes or locations of their choosing, sometimes up to five hours out of Portland, to cuddle. But she wanted to expand: she wanted a space.

It took her eight months to find a landlord who understood that her business had no ulterior motives. Cuddle Up To Me now resides in 3,500 square foot space and features four themed rooms (forest, ocean, universe, and zen), security cameras that record every session, and four professional cuddlers. Sessions cost about $1/minute and can last 30-180 minutes. The business welcomes anyone in need of human connection.

Without any direct stories, it can be hard to visualize these cuddling sessions. But a piece in Salon illuminates both what goes on in a session and how therapeutic it can be. Writer Melissa Duclos went into the experience unsure of what to expect, but she was quickly won over.

It’s hard to argue with the value of unconditional acceptance, though the notion that it can come from a stranger is difficult for many people to swallow. According to Hess, though, a stranger — who doesn’t know you and who isn’t in a position to judge you — is the best person to deliver this message. Beyond that, she explains, professional cuddling allows clients to be completely selfish, receiving what they need without having to give anything in return. It brings them back to being children: loved, accepted and completely taken care of.

Given this explanation of the value of cuddling, it was apt that the first cuddle position we used was called the “Mama Bear.” Hess sat on the bed with her back leaning against the wall, and instructed me to sit between her legs, my back and head resting against her torso. She wrapped her arms around me. I closed my eyes and kept my arms at my side, my hands on my own thighs. We remained silent, though Hess had assured me that talking was fine if I wanted to. As I leaned against her, she stroked my arms, played with my hair, and massaged my temples and the always tight muscles in my jaw. My breath began to deepen, matching the pace of hers. It started to occur to me that snuggling with a stranger was not such a crazy idea after all.

Duclos left the session feeling “euphoric, giddy like a child and more open to the world around me.”

Samantha Hess even developed a 40-hour cuddle training program to teach her employees 50+ cuddling positions, how to read body language, and how to guide the flow of the cuddling session depending on a client’s desires. Sometimes, clients prefer to cuddle on a couch rather than a bed, or listen to the cuddler read aloud to them. Some like to talk during a session; others prefer to remain silent.

The important thing, Hess emphasizes, is “making people feel worthy for who they are today.”