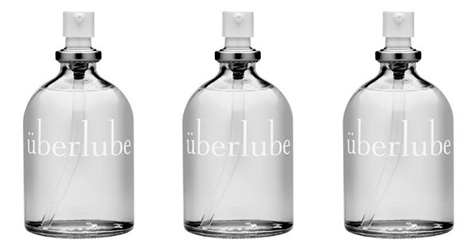 If you’ve ever wondered just what kind of research and development goes into lube creation (and we sure did!), you’ll love this article in the Chicago Reader that details the story behind Überlube. We just added Überlube to our shelves, having been impressed with its light, effortless feel and high-quality glass bottle. Now that we know the whole story, we appreciate it even more!

Here’s how Überlube came to be: Stephen Magnusen and Franz Zwergel were best friends since high school. After college, they lived together working various jobs: selling security products, modeling, producing hair shows. They were on the hunt for a business endeavor they could enter together, but no ideas were sticking until one night in 2002 when a friend described something using the invented word “überlube.” The word struck them. Nobody was making an actual product called “überlube,” so that is what they set out to do — create a lubricant that fit the adjective’s definition: the best, the greatest, beyond the norm.

Neither guy had a background in chemistry or much knowledge about lube, but they had connections: hair salon friends, a chemist father. They set up a lab in a basement in Wisconsin and began a rigorous testing schedule, and soon, they were self-made lube experts:

After almost three solid weeks of 12-hour days, their experiments grew increasingly obsessive-compulsive. Zwergel remembers them like this: “‘OK, now stick your arms out; I’m going to pour A on your left and B on your right.’ And then we’d test each other and put the same product on both arms. That’s when we knew we were getting burned out — when we started calling out differences between the same product.” One of Magnusen’s fonder recollections is of an experiment wherein he attempted to set Zwergel on fire to test the product’s flammability: “Some of our ingredients said that they were scorchable,” he says. “So we had Franz in the kitchen covered in Überlube and I had my creme brulee torch and I went to town on him. And I was unable to light him on fire.”

Magnusen even went so far as to invent a device to test lubricity. And three months later, after testing tons of formulations and extensively polling their friends, they found the winning formula. There are only four ingredients — dimethicone, dimethiconal, cyclomethicone, and tocopheryl acetate (vitamin E) — but they’re high-grade, with very specific proportions.

“I remember trying a new composition and calling Franz to tell him I think we have it,” says Magnusen. “It had all the fine qualities we were looking for, and I knew it the second I dabbed it on my wrist. Unperceivable tack. Zero foaming. Highly lubricious. Acceptable combination of sensation versus slip. And it had the one thing we really wanted to get right but didn’t know if it was possible: it lasted while I was using it and dissipated when I was done. I was totally psyched.”

Überlube was not designed solely as a sexual lubricant anyway. Magnusen and Zwergel saw it as more of an above-and-beyond product; so it is not just sold in sex shops, but also in hair salons and clothing boutiques.

For sure, silicone lube is a good thing to keep around the house. And on the bedside table. Do you have any favorite uses for silicone lube?

P.S. We have free samples of Überlube in the shop, so stop by and ask for a couple!