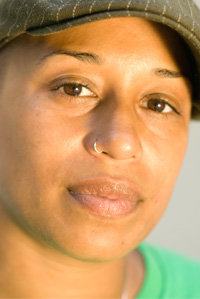 Interested in a Trans person, gender queer person or gender non-conforming person? Wanna have fun and be respectful? Wanna experience “non-traditional” sex and desire that is not based on stereotypes? Well, this is the workshop for you! Open to all sexual orientations and genders.

Ignacio Rivera, aka Papí Coxxx, who prefers the gender-neutral pronoun “they,” is a Black-Boricua, gender-fluid, Trans-Former, kinky, sex positive sex educator, sex worker, performance artist and filmmaker. They are one of the founding board members for Queers for Economic Justice and the creator of Poly Patao Productions. They can be seen in their debut performance in Pink and White Productions’ The Wild Search. They have worked with Morty Diamond of Tranny Fags on a Trans Entity: The Nasty Love of Papi and Wil. Papí Coxxx can also be seen on Queer Porn TV, Pink and White Productions’ Crash Pad Series, and in the soon to be released adult comedy by Cheryl Dunye and Sarah Schulman entitled Mommy is Coming.

This class has already taken place. Thanks for attending!