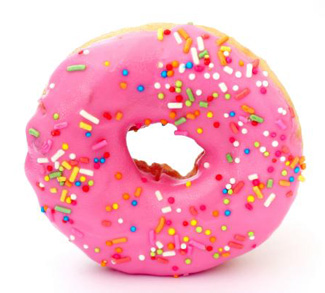 Chances are that at some point over the years, you’ve come across Cosmo’s infamous sex tip to put a donut on a penis and eat it off. It’s pretty ubiquitous. What you probably don’t know is how that tip came to be, how it has been recycled over the years, and how it plays out in practice.

Thanks to some rigorous journalism, we have the full story. Amanda Hess traced the donut/penis tip all the way back to 1995, where it appeared in a sexual recipe book called The Foreplay Gourmet, and then again in 2000, in a “sexual exercise” book where it was jokingly suggested as a tool to strengthen penile muscles.

But the tip graced the pages of Cosmopolitan for the first time in June of 2003. The cover of the magazine hinted: “99 Ways to Touch Him: These Fresh, Frisky Tips Will Thrill Every Inch of Your Guy (Our Favorite Requires a Glazed Doughnut).” An anonymous source elaborated: “My girlfriend gets a glazed donut and sticks my penis through the hole. She nibbles around it, stopping to suck me every once in a while. The sugar beads from her mouth tingle on my tip.”

The tip was repeated in future issues of the magazine and even in Cosmo-related books. Kate White, editor of Cosmopolitan from 1998 through 2012, admitted that sex tips could be recycled because “readers would age out of the magazine.” Plus, it was a different time, and even the silliest of tips represented an attitude shift:

. . . in 1998, young women had few outlets for reading about sex outside of the Starr Report. Crowding around a Cosmopolitan beat sneaking to the family desktop that moved at dial-up speed . . . only when White took over did the magazine actually get “very candid” about just what a fun, fearless female does when she hops into bed. [White says,] “We gave them permission to enjoy having sex.” For all its ludicrousness, Cosmopolitan presented a vision of limitless sexual experimentation, no shame.

The internet is faster now, and women are arguably more open about their sex lives. But still, the donut/penis tip lives on, joining the ranks of other strange household objects that Cosmo has posited as sex accouterments. Thankfully, there are brave souls in the world willing to test drive Cosmo’s ideas. Anna Pulley recently tried these five:

So how was the donut tip in action? Well, it certainly resulted in some hilarious conundrums:

Since I love donuts, I thought this would be the most enjoyable experience to try, out of all the tips. But it turns out that being picky about the donuts you want to put in your face works against you when you want to put donuts on a penis. I first searched for a chocolate old-fashioned — not only because it’s delicious, but also because the hole is often bigger than the ones in yeast donuts. After going to three different donut shops and failing, I settled on a common chocolate glazed donut, whose hole measured three-quarters of an inch (yes, I measured it).

. . . What the advice doesn’t mention is this: It’s virtually impossible to consume food and blow someone at the same time. This extra work made the dough job last a lot longer than it would have otherwise because I kept having to stop to chew and swallow before I could take anything else in my mouth.

Meanwhile, the pepper and fork tips made for lackluster sexual experiences, while the ice cream tip was deemed the best: “Ice cream, it turns out, is something not even Cosmo can ruin.” And although Pulley found that earlobes don’t provide nearly enough surface area to grasp, she was just happy “to try a tip that didn’t hinge on Cosmo’s insistence that I have sex with as many household items as possible.”

Since Joanna Coles took over Cosmopolitan in 2012, the magazine has been making a concerted effort to phase out sex tips that are only about pleasing a man, while giving an extra wink to the tips that may seem a bit off-the-wall. Anna Pulley tried all the tips on her female partner, and although most of them were failures, none of them failed because of her partner’s gender.