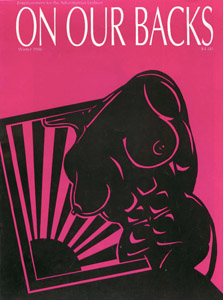 It was 1984 when On Our Backs, the first ever women-run erotica magazine — and geared toward a lesbian audience, to boot — debuted. The magazine was groundbreaking in many ways, and it played a major role in the development of sex-positive feminism.

What does this have to do with Steve Jobs? Well, as Susie Bright recounts on her blog, the magazine was originally composed via typesetting. Then one day, publisher Debi Sundahl hauled a big box into the living room and, in one fell swoop, thrust On Our Backs into the digital world. Sundahl was convinced that the computer was about to change everything about publishing — and she was right.

Within a year, our “entertainment for the adventurous lesbian” magazine took PageMaker 1.0 software, tossed out the typesetter, and published On Our Backs completely on Mac software.

We didn’t realize it at the time, but we were the first magazine to do so. We printed our 13,000 copies, and sent them all over the country.

Our On Our Backs Winter 1986 edition was what the first magazine — on any subject, anywhere — looked like, built on a 1984 Apple machine with Pagemaker.

The kerning is atrocious. You could only choose from Helvetica or Palatino fonts. I remember crying about that, too. But we could afford it; it was the only thing we could afford. And considering our content, which no one else in the printing industry would touch, that was saying something.

. . . I am very sad today about Steve Job’s passing. I know many of us are thinking about how his life touched ours, through good times and bad. For authors, artists, and publishing outlaws of every description, the Mac revolution was the puzzle piece we had pressed for, longed for, and finally achieved.

Susie Bright’s blog post is a lovely ode to the far-reaching influence of Steve Jobs. And you have to read her account of bewilderment, trepidation and intrigue as she assembled that first computer; it’s a reminder of just how foreign computers seemed not that long ago.

Take a peek at the On Our Backs Winter 1986 edition as well — it’s a piece of history all in itself.