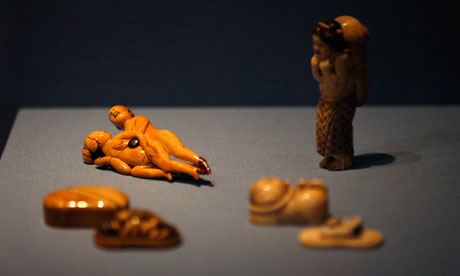 If you can make it out to London before January 5th, you’ll have the opportunity to see the most sexually explicit exhibition to grace the British Museum since its inception in 1753.

Shunga: Sex and Pleasure in Japanese Art is also the most extensive exhibition ever created on the subject.

Japanese shunga was a mainstream artistic genre from the 17th to the mid-19th century, during which time it was widely enjoyed and even presented to new brides as a form of instruction as well as arousal. Shunga is marked by exaggerated genitals, playfulness, luxury, and mutual pleasure.

Academics study the genre now, but for years starting in the 20th century, it was suppressed — even in the British Museum. It used to be confined to a cabinet of “obscene” artifacts. Finally, it is being given its rightful appreciation in the exhibition. And it sounds like a wonder to behold:

. . . Everywhere you look, your gaze is unambiguously directed toward the often oversized, luxuriantly depicted genitalia of both sexes. “It was a pictorial tradition not committed to naturalism, and so that permits selective emphasis,” said Clark. “Attention is focused on the sexual bliss on the faces – and the engines of that pleasure, the genitals. Other parts of the body are downplayed and then there are gorgeous textiles, lacquerware, food and drink, so there is a seamless continuum of luxury and pleasure.”

Shunga: Sex and Pleasure in Japanese Art runs through January 5th at the British Museum.