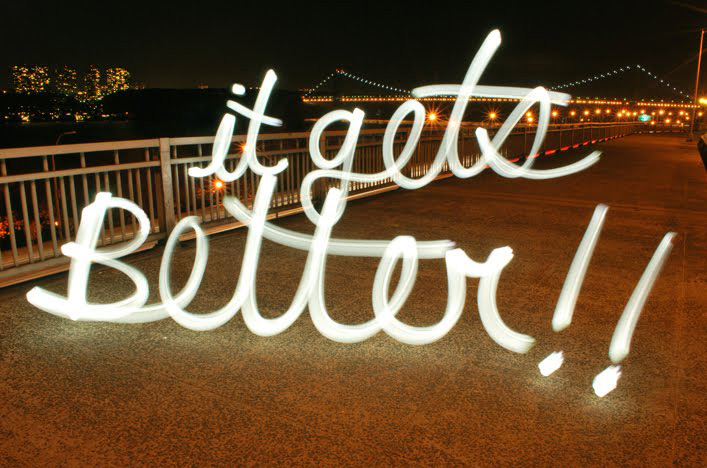 There is one instance of bullying every 7 minutes. And for LGBTQ kids especially, chances are high that they will experience bullying or harassment at school, which can lead to low self-esteem, depression, and even suicide.

It has taken far too long for the world to realize that bullying is not an acceptable rite of passage that kids should just learn to endure; it’s an extremely damaging ritual that must be stopped. Finally, in recent years, serious headway has been made toward educating folks on recognizing and preventing bullying.

In October of 2006, PACER’s National Center for Bullying Prevention started a bullying prevention week, which later became National Bullying Prevention Month. They have also declared October 10th “Unity Day,” a day in which kids can wear orange, hand out “unity” ribbons, and write the word “unity” on their hands or binders to express solidarity with the mission to stop bullying.

Many other important anti-bullying organizations have popped up along the way. The Trevor Project may have been one of the first, in 1998, with its invaluable support line (866-488-7386) that provides crisis intervention to LGBTQ youth. They now offer suicide prevention services digitally as well, by way of instant messaging and social networking.

The It Gets Better Project, founded in 2010, was revolutionary in the fight against LGBTQ bullying, and it is still going strong, with more than 50,000 user-submitted videos. In fact, tomorrow night (October 9th at 11 p.m.) marks the premiere of their second hour-long special on MTV and Logo. The first special, which you can watch online, aired in February. Both programs follow several young LGBTQ people as they face and overcome obstacles, proving that life is worth living — especially after high school.

And there’s a new and exciting project on the horizon that has taken a page from It Gets Better’s book. It’s a website called Equalize Youth. Right now they are asking for funding via Indiegogo, but it will be a place where LGBTQ youth can find support from people who are similar to them — folks who have walked in their shoes and made it through the hardest years. Here’s how it will work:

Searches will be as simple as entering a zip code. Kids can find entries by folks just like them, whether in their own hometowns or around the globe. Contributors will tag their ethnic backgrounds and religious upbringings in their entry to facilitate effective searches. Additional tags for experiences like being deaf, blind, going through “anti-gay therapy,” or being HIV+ will also be included. No matter what, we want youth to see (literally!) that they are not alone, that their challenges can be overcome, and that there is a world of unconditional love and support out there.

If you have an LGBTQ teen in your life who may need guidance or reassurance, there’s a great book called Queer: The Ultimate Guide for LGBT Teens that could be just what they need. If you want to help kids understand the impact of bullying, there are two sites, Teens Against Bullying and Kids Against Bullying, that teach young people how to recognize and prevent bullying.