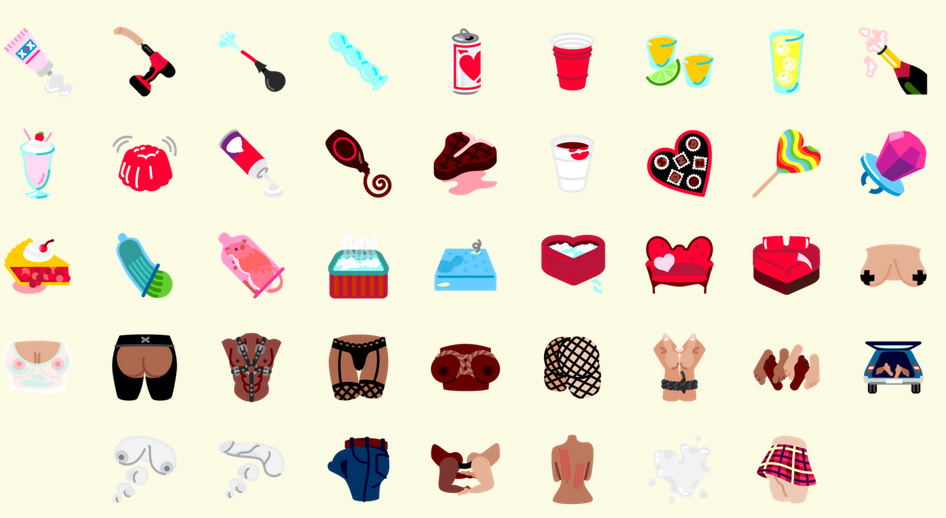 The Verge interviewed Katy McCarthy, one of the two artists involved in the project, who explained that Flirtmoji was born after many frustrating attempts at using existing emojis to communicate about sex. Behind the project at all times: inclusivity and sex-positivity. Many of the emojis were shown to the designers’ friends for feedback first.

We wanted to be able to show this to all of our friends and have them all feel comfortable. We wanted them to be able pick their own body parts in the Emoji — within the limits of size and colors. So we invited a ton of people to come look at them and to provide feedback. We wanted them to tear it apart, or say “yes, this is good and I feel safe.” It’s not supposed to be college frat humor, although part of being inclusive is making it funny. It’s just not that hard to have everybody feel represented.

Even the name of the project was deliberate. The team went with Flirtmoji to make the icons feel light, funny, and accessible to even folks not necessarily having sex. They wanted to represent everybody — including many skin tones and kinks — without judgment.

There are some challenges to drawing sex emojis that you may not realize. For instance: hair. Hair is very difficult to depict in the simple line stroke style of tiny icons. McCarthy agrees that hair representation is important, and the team is working on some new icons including it.

What’s really beautiful about sex, and emoji, is that sex is really playful and also really difficult. And at the core of good sex is good communication. So to that end, I think that whatever it takes for you to be able to communicate what you want or need, or what you don’t want and don’t need is fine . . . with sex there are things that are really hard to say and hard to ask for, and that’s such a beautiful window to be able to provide someone with language.

Flirtmoji is not available in the iTunes store — on purpose. The team read too many horror stories about sexually explicit apps being rejected, and they chose not to be involved in a sex-negative platform. Instead, you can download some emojis for free, and others for 99 cents, on their website.