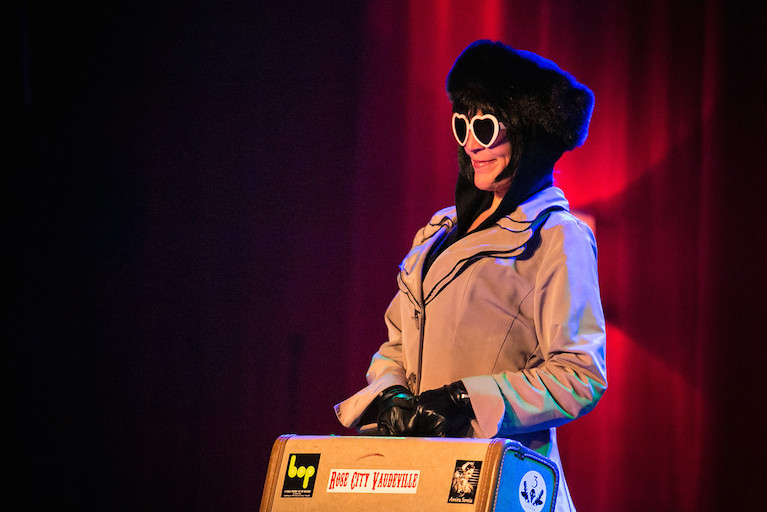 If you’re a follower of She Bop, you’ve probably noticed we have some very creative and talented folks on our staff. One of those people is our Education Coordinator, Amory Jane, and she has a popular new sex-themed stage show. It’s called Whoopee! A Sex-Positive Variety Show, and the next one is coming up this Friday, April 21st. We spoke with her about the origins of Whoopee!, what audience members can expect, and why the community needs a show like this one.

What exactly is Whoopee! A Sex-Positive Variety Show?

Whoopee! is a once-a-month live stage show that I started in December of 2016. The theme is that all acts are sex-positive, body-positive, or about human sexuality. From the comedy to the stories to the dancing, every show allows performers to express their sexuality, talk about sex in open and entertaining ways, and/or share their vulnerability and power with the audience. It’s also a great place for people to come learn new things, explore their own desires, and win a bunch of free sex products (which are provided by our amazing sponsors She Bop, Clone-A-Willy, and Überlube)!

I was originally thinking of organizing just one big Valentine’s Day show, but after the election results in November, performers and colleagues encouraged me to introduce Whoopee! to Portland as soon as possible. People wanted an unapologetic, sex-loving, queer-celebrating show to keep spirits high. So, we had our first show at Crush on December 4th. I didn’t know what kind of turn-out we would get, but it was a huge success! We had the room packed to capacity and, although it felt like complete chaos backstage with fifteen performers and all of the sexual energy zipping through the air, it also felt like we were making magic.

Where did you get the idea?

I grew up watching variety shows on television — I would watch reruns of The Ed Sullivan Show with my grandma, The Muppet Show, The Mickey Mouse Club, comedy shows like Saturday Night Live and In Living Color — and thought they were the best. I loved seeing all of the different talents and enjoyed the mix of live music, improv performances, and recorded/rehearsed bits. These shows were entertaining to watch and looked like a whole lot of fun for the performers and hosts.

After telling stories with The Mystery Box Show and singing with the Portland Cello Project, and after a few years of teaching workshops and emceeing numerous sex-positive events, I realized I had the boldness that it took to be on a stage in front of an audience. I also realized that I had met many talented people over the years of performing in and watching local shows, so it just sort of came naturally to me. I thought that I could host “a thing” and people more talented than me could perform in that thing… and of course whatever that thing was should probably be about sex, since sex education, smashing shame, and helping people feel empowered are my biggest passions. Lucky for me, there are many talented people in the Pacific Northwest who are also sex-positive and who loved my idea, and so Whoopee! was born.

The name of the show, “whoopee,” has a few meanings (that all seemed appropriate): 1. An expression of excitement or joy 2. Wild revelry 3. Sexual play.

What can audience members expect when they go to Whoopee!?

I encourage audience members to leave their expectations at the door and enter the show with an open mind. However, there are some things we always have at Whoopee! that folks can look forward to:

I like surprising the audience instead of announcing all of the acts in advance, but some of the performers we’ll have in April’s show are: boundary-pushing dancers from The House of Flora, an inspiring role-playing demo from sex educator and intimacy coach Stella Harris, a performance from Portland’s Glitterbeast Nikki Lev, and finalist for “Best Comedian in Portland,” Becky Braunstein. It’s going to be a great show!

What else should people know about Whoopee!? 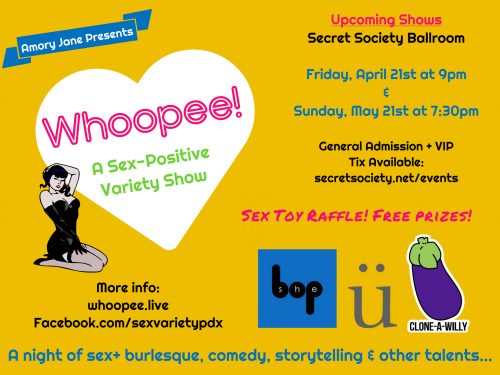 Our next show is this Friday, April 21st at the Secret Society Ballroom. I encourage people to RSVP on Facebook and purchase tickets online in advance since we’ve been selling out. Tickets can be found here, and we offer both a general admission option and reserved seating VIP tickets.

There will also be a Kinky Karaoke Afterparty hosted by KJ Luke and yours truly. It’ll be one part karaoke, one part kink demo, and 100% entertaining. Tickets to Whoopee! get you free admission to the after party, but if you have to work late that night, you’re always welcome to just join us for karaoke around 11 p.m. (and it only costs $3).

🎈HELP US REACH 10K FOLLOWERS🎈 This July we w

We got some new goodies this month! 😍 From the

WE DID IT!!🎉 A huge thank you to everyone who p

Wow thank you so much to everyone who's liked, sha

She Bop Pride Giveaway #2! 🎉 Yep you read that

Starting today She Bop will be matching donations