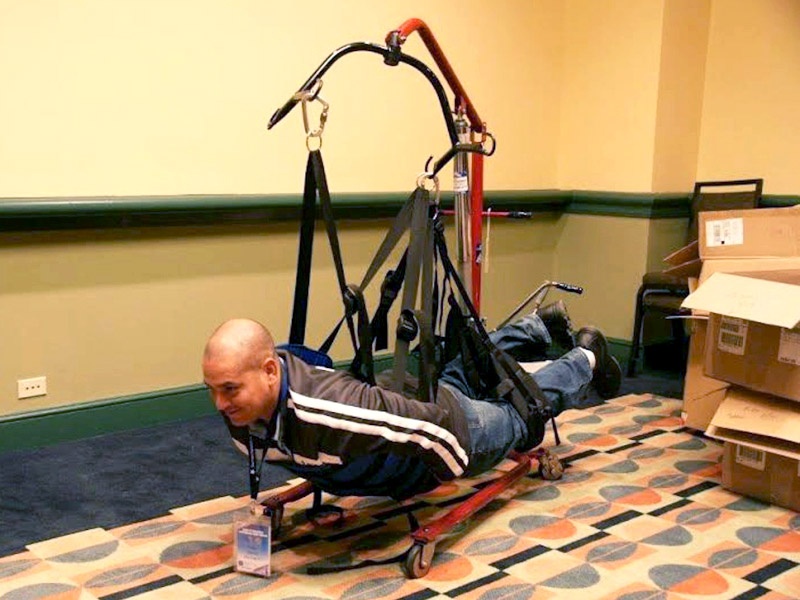 Sportsheets International began quietly, as a small business operating out of founder Tom Stewart’s garage. It was 1993, and Stewart had already spent years teaching himself to sew. He had a vision, one that had been sparked years earlier as he watched David Letterman, decked out in a velcro suit, jump on a trampoline and stick himself to a wall.

What if you could stick your sex partner to a wall?

The result of this inspiration was the company’s flagship product — a soft velcro bed sheet called the Sportsheet. With the accompanying anchor pads and cuffs, users could strap their partners down anywhere on the bed.

The following year, Stewart asked his sister Julie to become his partner in the business. Neither had any formal business experience, and the company wasn’t initially making much money, but the tides quickly turned. There was a definite market for the Sportsheet. Eventually, more of Stewart’s family joined the business, and they now operate out of a 17,000 square foot building in Huntington Beach, California. They’ve developed more than 400 different bondage and positioning products, with half manufactured in the US.

Tom Stewart, you could say, has become an expert on encouraging sexual creativity and helping people achieve sexual positions. He also spent 20 years in the military. So it made sense when, five years ago, he was invited to show off his products at the Coalition to Salute America’s Heroes Road to Recovery ​conference, which brings wounded troops and their families together. His straps, slings, and harnesses were a huge hit with attendees — so he kept going back, listening, brainstorming, and inventing.

That’s how he came up with the heavy-duty adaptive sling pictured above, designed for a quadriplegic veteran wanting to have sex in the missionary position. He also invented a strap to facilitate doggy style for folks who can’t bend over easily. Even something as simple as a thigh harness can change a couple’s sex life, as Stewart explains:

I said to his girlfriend, “Come over here. Squat down on this thing — imagine you’re naked and this dildo’s going inside of you.” So, she was kind of grinding on his thigh — you know, simulating — and she’s going, “Oh my God, this is phenomenal. We can have intercourse like this!” This was really the beginning of products for people who have disabilities.

Direct from the Big Island of Hawaii... we present

Today’s the last day to shop with us and support

Here is the final friend from @cutelittlefkers ! P