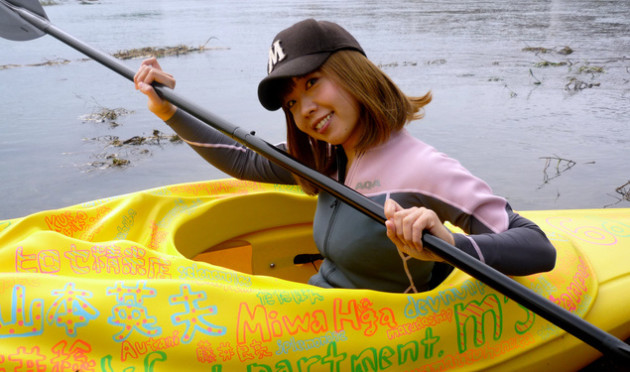 The 42-year-old sculptor and illustrator launched a crowdfunding campaign last year to raise money to create a “pussy boat,” a kayak formed in her vulva’s image. The campaign was wildly successful, and as a token of thanks, she offered to send a 3D printable image of her vulva to those who donated $30 or more.

In July, Rokudenashiko was arrested for following through on her promise — or, as the police deemed it, distributing obscene material. They raided her office, seized 20 of her art pieces, and arrested her. In response, she has said, “I cannot agree with the police’s decision to label the data as obscene. To me, my vagina is like my arms and legs. It’s nothing obscene.”

The arrest spurred a petition protesting the charges, which has now surpassed 20,000 signatures, while Jon Stewart pointed out Japan’s “genital double standard” in a segment of the Daily Show, saying, “Japan, you arrested a woman for 3D-printing her vagina, but you gave dicks their own holiday.”

Rokudenashiko was released a week after her arrest, but she could be re-arrested and formally charged down the road. If found guilty, she would face up to 2 years in jail plus a fine of 2.5 million yen ($24,655).

For years, Rokudenashiko has been making artwork to combat Japan’s silence around the vulva. Her amazing work has included iPhone cases with vulvas on the back, glass vulvas hanging to form a chandelier, a vulva charm bracelet, a lamp with lit-up clitoris, and tons of vulva-shaped dioramas in a seris called “Deco-Man” (after the Japanese word for pussy, “manko”).

Why did I start making this kind of art pieces? That was because I had not seen pussy of others and worried too much about mine. I did not know what a pussy should look like at the same time I thought mine is just abnormal. Manko, pussy, has been such a taboo in the Japanese society.

Penis, on the other hand, has been used in illustrations and signed as a part of pop culture… [but] pussy has been thought to be obscene because it’s been overly hidden although it is just a part of women’s body. I wanted to make pussy more casual and pop. That’s how I came to make a pussy lampshade, a remote-controlled pussy car, a pussy accessory, a pussy smartphone case, and so on.

As “taboo” as it seems to make vulva-themed art in the United States, Rokudenashiko is up against an even more uptight society. She’s a brave and fearless individual — and hearing her describe and create her art is bound to make you smile.

Update! Rokudenashiko wrote a book called What is Obscenity? Of course, we picked it up!