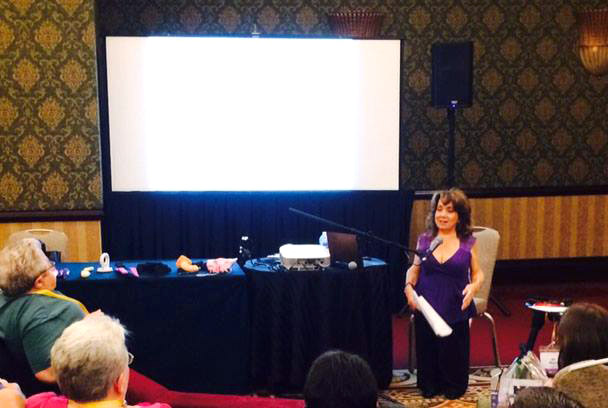 Dr. Marylou Naccarato is doing something pretty groundbreaking: she’s talking about sex as a Little Person. According to a recent profile in The Atlantic, Naccarato is the first in her field to focus specifically on the sexual needs of Little People — physical, emotional, and psychosocial.

Naccarato, who has a type of dwarfism called Kniest and stands 3’10” tall, worked for 23 years as an IRS agent, although she’d always harbored dreams of being a social worker. Then, one evening while watching a TV show on sexual health, she was struck by the narrator’s tip that a certain sex position could alleviate back pain.

Naccarato knew she had adapted her sex life similarly to cope with hip pain, and she knew that Little People can have particular physical challenges during sex. But she’d never heard people talk about it.

There wasn’t much talk, and there wasn’t much literature. Naccarato scoured libraries, bookstores, and the internet, but there was little to discover. She began informally polling her friends about their sex lives. Not only were they open to talking about the subject — they were excited about it.

Then, Little People of America agreed to have her present a workshop at their conference in San Francisco. Having attended LPA events since she was a child, Naccarato had witnessed tons of presentations about relationships, marriage, and parenting, but the conservative family organization was mum on the topic of sex.

Now, 10 years later, Naccarato is a board certified clinical sexologist, has a doctorate from the Institute for Advanced Study of Human Sexuality, and is an AASECT Certified Sexuality Educator. Needless to say, she no longer works for the IRS.

Dwarfism is a spectrum, and thus, some Little People face many physical obstacles, while others do not. When it comes to sex, some folks have arms that are too short to reach their genitals, hip rotation limitations and inflexibility that inhibit certain positions, and paralysis from the waist down due to severe spinal stenosis.

In the same way that tools such as dressing sticks assist Little People in everyday situations, certain sex products can also help. Fleshlight mounts, longer vibrators like the Magic Wand, condoms that are easier to put on, and positioning pillows can all aid folks of short stature. Naccarato has invented her own product, the Love Bench™, which is custom fit to the customer’s size. Great for people of all sizes, it is most awesome for people with limited range of mobility in their hips/knees from joint implant or other degenerative bone conditions.

Naccarato has even been able to run her own booth in the Expo at the Little People of America conference, albeit shrouded in a black curtain beckoning “adults only.” She is the only person to offer sex-related items in a trade show dedicated to adaptive products and resources.

Aside from logistical physical issues, Naccarato believes strongly in the emotional aspects of sex education. Little People can be particularly hindered by their upbringings, in which parents often skirt the issue of sex, while the world at large gawks.

According to Naccarato, “The psychosocial limitations of society may be more disabling than the physical symptoms.” She helps clients cope with the internalized otherness that comes from a lifetime in a body that is stared at, mocked, and poked at.

. . . “People with disabilities may have had an asexual upbringing and protective families that prevented growth,” says Naccarato. “Living under the attitude of the medical model from a lifetime of surgeries and insensitive doctors teaches people with disability that their body is broken, not sensual.” She works hard to show that Little People can allow themselves sensuality, pleasure, and connection.

To say that Dr. Marylou Naccarato’s work is important is to put it very mildly. She’s a pioneer.