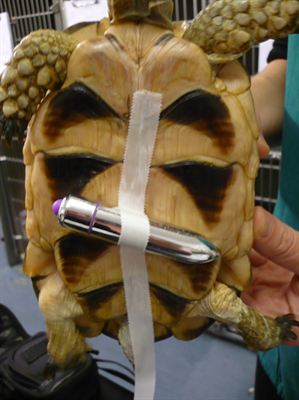 As it turns out, vibrations work very well at breaking up intestinal blockages. That is just one thing we learned from Cracked’s 5 Weird but Effective Alternate Uses for Sex Products.

Two of the alternative uses on Cracked’s list were discovered in World War II. The first: condoms prevent water and dirt from getting in the barrels of guns and damaging them. Condoms were easy to come by thanks to the wartime panic about venereal disease, so it was a perfect solution. The second: semen makes great invisible ink. It doesn’t react to iodine vapor, the common detection method during the war. It does, however, have a distinctive odor… so its presence on paper might not be 100% discreet.

Oh, and if you’re ever trying to protect a microphone from a rainstorm, just roll a condom over it. This is standard practice for the BBC and other sound technicians.

But perhaps the most versatile sex product is lube. We’ve written about alternative uses for silicone-based lube, but water-based lube is perfect for movie special effects. It helps remove latex prosthetics and makes wounds looks fresh. In movies such as Alien and The Thing, K-Y Jelly is responsible for all the terrifying goo dripping from the monsters. Specifically, the bright green blood from Predator was a concoction of K-Y Jelly and the liquid from glow sticks.

K-Y was even used as a substitute for Kate Winslet’s spit in Titanic‘s famous “spit like a man” scene.

One thing not mentioned in the Cracked article is that vibrators can be used to improve singers’ vocal performance. A Canadian vocal coach caused a ruckus last year when he explained that he uses vibrators to massage the throats of his students. It relaxes tension in the larynx and improves range and projection, he says.