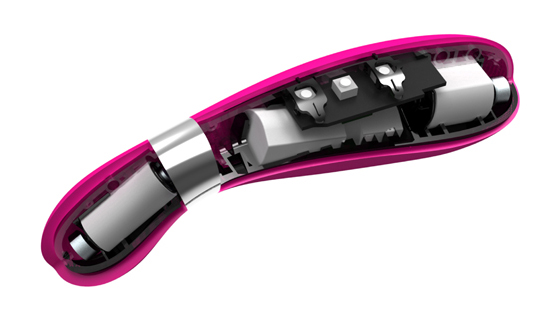 Jimmyjane is one of the most recognizable names in luxury sex toys, and that certainly didn’t happen by accident. In a great article from The Atlantic, the author peels back the curtain on the Jimmyjane enterprise, using it as a springboard to muse about the influence that thoughtful sex toy technology and design can have on the way people view the role of sex toys in their lives.

The founder of Jimmyjane, Ethan Imboden, holds an electrical engineering degree and a master’s in industrial design. For a while, he designed consumer products such as cell phones and electric toothbrushes. But when a potential client asked him about designing a sex toy, Imboden took a fateful trip to the Adult Novelty Manufacturers Expo. It was ten years ago, and most sex toys were not exactly glamorous. He found himself bombarded with

. . . Imboden was inspired. “As soon as I saw past the fact that in front of me happened to be two penises fused together at the base, I realized that I was looking at the only category of consumer product that had yet to be touched by design,” Imboden said. “It’s as if the only food that had been available was in the candy aisle, like Dum Dums and Twizzlers, where it’s really just about a marketing concept and a quick rush and very little emphasis on nourishment and real enjoyment. The category had been isolated by the taboo that surrounded it. I figured, I can transcend that.”

Jimmyjane is an innovator. They were the first to use white packaging, despite resistance from retailers who thought customers would be put off by it. They were the first to invent candles with a melting point that matched body temperature. And they are changing the way people see sex toys, along with other luxury brands like LELO and Je Joue.