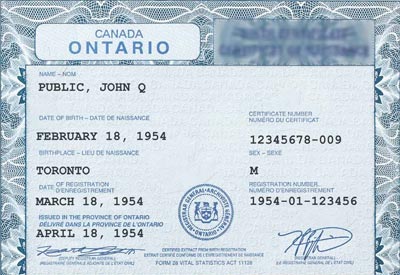 Rest of the world, take note. Both Ontario and Argentina have recently taken some big leaps forward for trans rights, allowing for gender self-determination on birth certificates without proof of medical, judicial, or psychiatric procedures first.

Ontario’s change came in the form of an April decision that struck down a previous rule in the Vital Statistics Act, which required a person to undergo what it called “transsexual surgery” before being able to legally change the gender listed on their birth certificate. Deeming the stipulation discriminatory, the Ontario Human Rights Tribunal has ordered the provincial government to remove it.

The overarching nature of birth certificates could mean that this change will extend to passports as well. It could also influence legislation in other provinces and territories.

Argentina has gone even further, introducing a new bill that grants citizens the freedom to change their legal gender without jumping through any hoops first. The bill won congressional approval this month with a resounding 55-0 Senate vote. Some are calling it a game changer, noting that it is far beyond what most countries have on the books. Katrina Karkazis, a Stanford University bioethicist who has studied the legal and medical barriers for trans folks in the U.S., said:

This law is saying that we’re not going to require you to live as a man or a woman, or to change your anatomy in some way. They’re saying that what you say you are is what you are. And that’s extraordinary. Rather than our more sedimented ideas about what it is to be male or female, this sort of throws all of that up in the air in a really exciting way.

In the U.S. and Europe, changing one’s gender marker on a birth certificate usually requires proof of gender reassignment surgery, hormone therapy, and/or psychological evaluation — exhausting requirements that can often be emotionally, physically, and financially stressful.