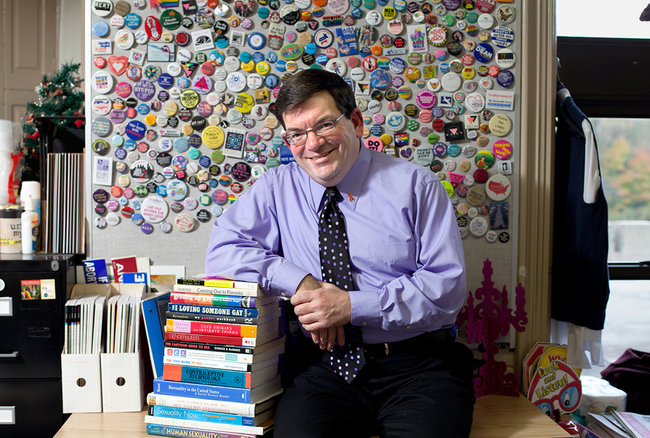 As most sex ed programs in the U.S. continue to push abstinence, a gutsy teacher from a Quaker prep school in Pennsylvania is showing everyone what comprehensive sex education could look like — and it looks very promising. Al Vernacchio (“Mr. V,” as his students call him) teaches an elective class for seniors entitled “Sexuality and Society” at the Friends’ Central School.

The in-depth New York Times Magazine article about Vernacchio’s class recounts the roots of sex ed in America — the original concept of “proper sex” between a husband and wife only — and the winding path it has taken, including a stint in the ’70s and early ’80s when sex ed was pretty comprehensive in response to AIDS and teen pregnancy. Now, of course, sex ed has become a highly divisive, politically-charged issue, and most classrooms rely on an “abstinence is best” message. Vernacchio’s doesn’t. In fact, his syllabus covers many subjects surrounding sex:

Sexuality and Society begins in the fall with a discussion of how to recognize and form your own values, then moves through topics like sexual orientation (occasionally students identify as gay or transgender, Vernacchio said, but in this particular class none did); safer sex; relationships; sexual health; and the emotional and physical terrain of sexual activity.

Vernacchio is in the business of busting myths and making his students think. He is constantly tackling gender stereotypes — by explaining that men are not naturally hornier than women, or by asking students to examine the myriad ways in which the sex-as-baseball trope is problematic. He also shows his class close-up photos of vulvas and penises, which leads to discussion about genital variation. He even screens a medical research video of a woman ejaculating — an act that is virtually never discussed in sex ed classes.

There’s also an anonymous question box in Vernacchio’s classroom. One day, a girl submitted a note asking whether her urge to pee during sex could lead to female ejaculation.

He laid out a plethora of explanations for the feeling, everything from anxiety about having sex to a bladder infection to the possibility that the young woman was getting “some really good G-spot stimulation” and in fact verging on ejaculation.

And that is perhaps what is most amazing to hear: the way the students have benefited from the course. To them, “Mr. V” is both a teacher they can trust to tell them the truth, and a confidant they can talk to about sensitive subjects. It is clear the kids have learned a lot about relationships, pleasure, and how to navigate their sexualities.

The school’s administration is pleased with Vernacchio’s course, and so are the parents of the students, who have never complained.

Check the article out — it’s a really fantastic read.