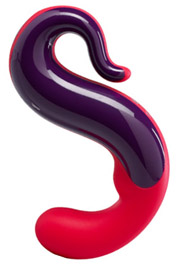 The G-spot gets a lot of attention in the media. From a glance at the headlines or even a flick of the TV remote, one might assume that the G-spot is nothing more than an imaginary pleasure center invented by Cosmo. And many are understandably put off by the way the G-spot is often hyped as the holy grail of pleasure.

Of course, nothing in particular is the holy grail, since everyone experiences pleasure differently. But the G-spot does exist — and every person with a vagina has the potential to feel G-spot stimulation.

Put simply, the G-spot is an area on the roof of the vagina through which the urethral sponge can be stimulated. Some women enjoy the sensation; some have to learn to enjoy it; others don’t care for it at all. G-spot stimulation may or may not lead to orgasm or ejaculation. But the G-spot is still quite misunderstood because, for its entire existence, we’ve been given conflicting stories about it.

German gynecologist Ernest Grafenberg was the first to write about what is now known as the G-spot, in a 1950 paper entitled “The Role of Urethra in Female Orgasm.” This controversial piece posited that the urethra was surrounded by erectile tissue which, when stimulated, swelled and became more sensitive. Grafenberg also noted that some women’s orgasms were accompanied by a release of non-urine fluid from the urethra.

30 years later, a book called The G-Spot: And Other Discoveries About Human Sexuality came out, and quickly became a best seller. The book detailed the authors’ original research study of 400 women, and concluded that yes, there is an area on the front wall of the vagina that responds to pressure. They called it the Grafenberg Spot.

As the G-spot began to permeate the popular consciousness (thanks in no small part to sex toy shops and curved G-spot toys), scientists felt it was time to study it. Only, they didn’t do a particularly good job. A 2001 opinion piece published in the American Journal of Obstetrics & Gynecology — which called the G-spot a “gynecological UFO” — received a lot of mainstream press, but the essay merely concluded that there wasn’t enough scientific evidence to prove the G-spot was real.

Then came the bombshell study of 2010 that incited alarming headlines. 1,800 women, who were all twins, were studied by scientists at King’s College in London. The study consisted entirely of interviews, including the questionably-phrased query, “Do you believe you have a so-called G-spot, a small area the size of a 20p coin on the front wall of your vagina that is sensitive to deep pressure?”

While 56 percent of the women said “yes” to that particular question (and 40 to 48 percent said it was “not difficult at all” to have a vaginal orgasm), media sources overwhelmingly reported that this study was proof that the G-spot doesn’t exist. Why? Because that’s what the researchers concluded. Finding no pattern in the pairs of twins, they concluded that the G-spot was subjective.

The bias of the researchers wasn’t the only flaw in that study. Scientists specifically excluded lesbian and bisexual women from participating, and failed to ask questions about digital or sex toy penetration — only vaginal intercourse and clitoral stimulation. They didn’t ask about sexual positions, either.

Some sex educators — such as Rebecca Chalker (author of The Clitoral Truth) and Betty Dodson — believe that the urethral sponge is part of the clitoris, and therefore that G-spot orgasms are still clitoral orgasms. A 2006 article from a neurologist named Helen O’Connell, entitled “Anatomy of the Clitoris,” agreed, explaining that the walls of the clitoris wrap around the urethra and are composed of erectile tissue. But, as Tristan Taormino explains,

These works technically refuted the G-spot; however, it was more a matter of semantics. They clearly supported the idea of the urethral sponge made of erectile tissue and a sensitive area on the front wall of the vagina — they just reframed it with different language.

The truth is, while science can certainly help us understand a great many things, it is still pretty far behind. Right now, what matters more than scientific proof is overwhelming anecdotal proof — and the support of sex educators and sexperts such as Carol Queen, Susie Bright, Violet Blue, and Annie Sprinkle.

Tristan Taormino put it best in her new G-spot book:

For all the women who answered yes to that British survey question, the hundreds interviewed for The G-Spot, and the thousands I’ve talked to in my fifteen-year career as a sex educator, the G-spot definitely exists. And although it’s very sensitive, it doesn’t care what its critics say about it.

Do you want to feel sexier in the skin you're in?

Join us and @stellaharriserotica in discussion of

It's the first Tuesday of April when means we have

🌱Spring has sprung! 🐥🐝 Bring some of that

Hello April everyone! 💙 When you purchase a Fun

Check out what's new to our shop!👀 We-Vibe has

We are proud to share that Portland Chocolate Labo

We're hiring! 💛 She Bop is seeking a sex-positi

Did you know that She Bop is women-owned? Read bel

Daddy roleplay can be misunderstood, and some peop