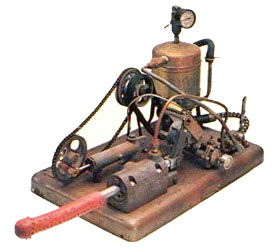 Have you ever wondered how sex toys came to be? Well, the story involves dubious medical conditions, goat eyelids, hilarious magazine ads, dragon tongues, and a cast of characters that ranges from a former police officer to a ventriloquist. Intrigued? Read on…

Olive oil may have been one of the first lubricants. It was promoted for contraception starting in about 350 B.C.

Ben wa balls were invented around 500 A.D. These little balls — some solid, some hollow with “clappers” inside that created a ringing sound — were inserted into the vagina. They were originally meant to provide pleasure to a man during intercourse, but their ability to improve the pelvic floor muscles was eventually discovered.

Cock rings first appeared around 1200 in China. They were made from the eyelids of goats… with the eyelashes still intact. These cock rings were flexible and had to be tied around a man’s erection. Why the eyelashes? Well, they were thought to amplify the pleasure of sex.

By 1600 or so, cock rings had evolved quite a bit. They were now stiff ivory rings that Chinese men used to maintain their erections. The rings were ornately carved, usually with depictions of dragons. Over time, the dragon design became more and more intricate, until finally the dragon’s tongue extended beyond the ring, creating a nub that stimulated the clitoris during intercourse.

Not much is known about the history of the butt plug, but during the Victorian era, one European doctor suggested that his patients insert a wooden egg anally. It was believed that pressure against the prostate gland would guide semen back to the bladder, thereby preventing “wasteful ejaculation.”

1869 was a landmark year in the history of sex toys. For centuries, doctors had been treating women for a plethora of illnesses (most notably hysteria, which had symptoms very similar to those of sexual arousal) with what they politely called “pelvic massage.” The point was to induce “hysterical paroxysm” — yes, orgasm — in the patient.

Hysteria was a recurring condition, of course, and doctors grew tired of the time-consuming treatment, complaining of fatigued wrists and hands. In an effort to aid them, an American physician named George Taylor, M.D. invented a hulking, steam-powered device called the Manipulator. The engine of the machine was so monstrous that it was hidden in another room, while the apparatus was threaded through a hole in the wall.

Consumer magazines such as Home Needlework Journal and Woman’s Home Companion featured advertisements for vibrators, touting them as wonderful health and relaxation tools that could cure headaches, wrinkles, and nerve pain. Yet there was an element of playfulness to some of the copy — for example, “all the pleasures of youth… will throb within you.”

In 1980, KY jelly finally went over the counter as a sexual lubricant. Since its inception in 1927, it had been used by physicians during pelvic exams. This opened the flood gates, and a huge variety of lube is available today, including special flavored and stimulating gels.

Things really began speeding up in the ’90s. Vixen Creations, San Francisco-based manufacturer of 100% silicone sex toys, was founded in 1992. German company Fun Factory, known today as the company that makes cute, brightly-colored toys, came along in 1996. Tantus joined the party in 1998.

Business is booming! Luxury Swedish sex toy company LELO was founded in 2003, and they were the first to create a rechargeable vibrating cock ring, as well as a USB-rechargeable clitoral vibe. Jimmyjane, another manufacturer of high-end toys, was founded in 2004. Stainless steel sex toy manufacturer njoy and wooden sex toy company NobEssence followed in 2005. In 2006, a former Apple employee partnered with her husband to create the world’s first music-driven vibrators.

In 2008, the public was introduced to the first sex toy that remembers what its user likes, the now-discontinued Je Joue SaSi, causing awe among consumers at how advanced sex toys have become.

Where are sex toys headed next? Some predict advanced phone apps, virtual sex, and biometric controls that respond to moods, body heat, and even brainwaves. Others simply imagine an increase in hygienic materials and eco-friendly options. What would you like to see?